How come you ended up at Berghs from the very beginning?

Sebastian: Personally I’ve always been interested in communication so obviously, in Sweden, Berghs is the natural choice. I chose the bachelor program because I wanted a communications education but also a degree, a bachelor. I also wanted to be abroad, so it was a perfect fit. As soon as I found it I knew it was exactly what I was looking for.

Jakob: It was the same for me. I always wanted to write so I thought about becoming a journalist. I also thought about becoming a lawyer and a civil engineer. And a copywriter. I stumbled across the web site and figured that since I have so many interests, if all of them could be combined within an education where I would get to work with words I could sort of not have to chose what to be interested in. It was a good choice. It worked out for the better.

Your first semester was here in Stockholm, at Berghs. What are your strongest memories from that time?

Jakob: Personalities. A bunch of different personalities – all the teachers and also the students. It was a different experience from studying than what I was used to. It felt like everyone was really “there” – committed and enthusiastic.

Sebastian: My strongest memory is the Brand X competition. I was quite inexperienced at the time and Berghs is very much “learning by doing “. I really liked being thrown into it straight away. That was the first time I really felt that I learned the craft, or rather it was my first step towards learning the craft. I also remember all the people from so many backgrounds and the crossing of disciplines.

After that first semester you headed for Australia and Perth. Did you know from the start that Perth was the city where you would do your majors?

Sebastian: Perth stood out for me from when I heard about it the first time. Australia is an exotic place in itself and I’d heard really good things from other students. I never doubted.

Jakob: My choice was mostly pragmatic. I knew I wanted to work with words and back then Perth was the natural choice if you wanted to do that. It was either Perth or New York and since I have family in New York and have been there a lot, I wanted to do something completely new. I’m very happy with the way things worked out.

Sebastian: It is a university rather than a portfolio based school. Berghs is very much “do, do, do” and at ECU you still have to read. But, for a university degree there’s a lot of practical stuff. For example, I was in three competitions and did a study tour to Dallas, so they do offer you a lot of extracurricular stuff. I had a unit called Creative Strategies where all our assignments were pitches, so that was “all do”, while in some PR units it was basically “all read”. Compared to many universities ECU has a lot of professionals as teachers and maybe a bit fewer academics.

Jakob: The advertising major is probably the major that has the most practical work. Still it is definitely focused on being able to present and coming up with strategies and ideas. You still have to type up the marketing plans but that is something you need to know how to do if you’re in a traditional corporation, so…

Sebastian: One big difference is that at university you have to reference everything.

Jakob: There’s no getting around it. It’s just the way universities work. There are word counts and you need to have so and so many references. To me, personally, it’s much more interesting what people think themselves than what they think about what someone else said, but that’s the way it works.

Are there any internships included in the studies at ECU?

Jakob: There are no internships included in the units, but there are separate units called “work place experience” or “professional placements. You need to find your own internship but Diane, the head of the advertising department and international relations, frequently posts on Facebook saying there is an internship available here or there.

Sebastian: Yes, Diane and the school give you the tools but you have to do it yourself. It’s the same with competitions – we do represent the school but we are the ones making decisions, forming teams and doing the work on our spare time.

Speaking of competitions, did you participate in any?

Sebastian: Oh yes, I was in the Google Online Marketing Challenge and the national Big Idea Competition, and the IAA Inter-ad Competition with Jakob. That one we won.

Sebastian: IAA Inter-ad is an annual worldwide competition that this year was a cooperation between the IAA and Dentsu London, with a real client, Canon. So it was a real brief from a real client.

Can you describe the brief and your campaign idea?

Sebastian: The client, Canon, was asking for a pan-European branding campaign. Basically the brief was “break conventions, bring a game changing campaign”, which is easier said than done. Actually it was a real challenge. We followed the brief, said to ourselves: “whatever we do, we need to break conventions”. We looked at other campaigns in the history that had broken conventions and said, “Ok, we have to top that”. In the end I think we won because we were the most creative team, that’s what the jury said.

Jakob: We had to submit a plans book, which basically includes a case history, the research, the campaign and the creative execution. We tried to break it down to try to define what Canon does on a more emotional level, or philosophical if you will. We looked at Canon as a bridge between imagination and expression and broke it down to the idea of Canon providing tools that, in the end, pushes evolution of mankind forward. If you increase the complexity of the tool, you increase people’s ability to express themselves. So you also increase their ability to imagine. No one could imagine the Mona Lisa if they did not know that there is such a thing as a brush. Raising the bar of technology is raising the bar of imagination. We wanted to do this by making a short film but we could only supply a script and a storyboard, which was a challenge.

The short film is a tribute to Stanley Kubrick’s 2001: A Space Odyssey, but instead of using the tool for violence, the ape that discovers the tool uses it to draw a circle on the wall of the cave, which represents the wheel. It’s the tool developing mankind. And then it cuts from that to a classroom where students are watching this movie discussing the concept of tools, imagination and creativity.

Sebastian: the idea is not that complex but the execution is. They asked for a grand campaign so we put a lot into it and made something grand. I think that is why we won.

Jakob: We made it complex. If we could do it over again we’d do a better job with the execution but our core idea would be exactly the same. We would just have to refine the way we presented it a little bit. Now if we were asked we could probably turn this thing into a 30-second TV-spot. We had a very big idea and it sprawled out a bit. On a good note though, we did manage to win. 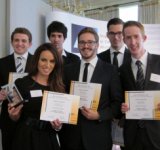 What does it mean to win a competition like that?

Sebastian: We were invited to an IAA business lunch in London at the Mandarin Oriental and met people from everywhere; different agencies and representatives from BBC and CNN were there. We got to meet the clients, discuss our campaign and trade business cards. Also, we received Canon cameras and a nice trophy, both individually and for the school.

Jakob: ECU paid for the trip and accommodation in London. Winning a competition like this is valuable for our portfolios and it’s really a great thing getting introduced to all these people. We also got to present to the real client and about 100 other people.

Three years have passed since you started your Berghs Bachelor journey and now you are actually finished. What happens now?

Sebastian: I just moved to Singapore. I got the opportunity to work for Electrolux at the marketing department there. I took the chance because I really love Singapore and always wanted to know how it would be to live there. I think it’s great to be on the client side, to learn more about their point of view. As all the bachelor students are bound to find out, the first 6 months in a new country are always difficult, but luckily I’ve been through that before and Asia is an exciting place to be, it feels like the future. Singapore is an awesome city and I’m enjoying it a lot, it’s already at Sweden’s level but growing rapidly. And the fact that it’s only a 6-hour flight from Perth made all the difference.

At ECU the connection to Asia is quite strong, and ECU has proven to be valuable to have in your baggage if you want to make it there. There are a lot of exchange students from Asia at ECU so you understand how they work. They have a completely different perspective to us.

Jakob: Since a few weeks back I’m working in Stockholm at a small agency called Insikt Kommunikation. My official title is planner/copywriter. Today I’m working mainly with copywriting but hopefully I’ll be working with both that and more planning oriented stuff.

Where do you see yourselves in the future, let’s say in about five years from now?

Sebastian: That is a very, very tough question. I probably want to work on the agency side in the long term. The company I am with now is excellent, but in the long term maybe I will want to be in a creative environment. But you never know. I really like it where I am right now.

Jakob: I’d like to be in the same position as I am right now but further advanced, in a medium sized or small agency within planning and copywriting. I never want to be on the end where you are just given a task to do, but where you need to figure out yourself what needs to be done and then do it.

Sebastian: If I’m going be on the agency side I’m similar to Jakob, but probably an account planner would be my fit.