Congratulations! How does it feel?
Feels great, of course! We’ve had an unforgettable week in Cannes, had really interesting conversations with a lot of different people, and danced with even more.

What was the feeling when they called your name?
Awesome! To show our case film and work in that huge theatre with hundreds of people watching and cheering – It was definitely a new kind of feeling.

Tell us about your case, Google Gesture.
Google Gesture is a tech innovation that translates sign language into speech by using electromyography. By analyzing your muscle activity in your arm it can identify which signs you are making. – But the interesting part about the case is not the technology. The product that analyzes your muscle activity is based on a rather old technology, though it has been refined later years. Sure, new technologies are really cool, but it is first when they are interacting with humans in a way that they solve real problems they get interesting. When this is achieved you can communicate in way that makes people listen and care about them, not only thinking it is cool. This is probably one of the reasons our case has been spreading on social media.

Why do you think you won?
The idea came early and did not need much development. We spent a lot of work building a story around the solution and connect it with the sender, and what they stand for. 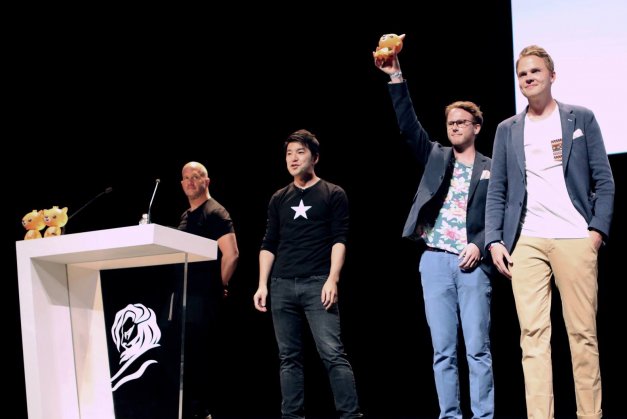 How did you celebrate?
Ludwig laughs.We did have some glasses of champagne.

How does it feel getting all this attention around the world?
It is fun to see the views counting up and people tweeting about it. That is probably the most fun to see, that people want to show their friends and followers. On some places there is a mix up that this is a real product from Google, which has never been the case (yet…). Google was one of the sponsors at Future Lions, so they know about the case and think it’s a good idea.

Do you think people were disappointed the product was not real?
We have heard and read about some really disappointed people and that is unfortunate. We had no clue this would go viral in this way and people would think it was for real. But we don’t think it’s all for nothing since we have gotten the discussion out there and none the less Google’s attention.

And the fake twitter account, why do you think this buzz about you started?
Ludwig laughs.We were really surprised someone took the freedom to start a Q&A on Twitter. Name squatters are rarely welcome, but I guess we should feel a little flattered. Someone probably wanted to grab the attention and make some sort of winning out of it. They got a handful of influential followers, so I’m a little jealous actually…

Sounds interesting and you should probably feel flattered about it. Again, congratulations and make sure you enjoy this!